Horticulture Posts...refresh your page if no results show 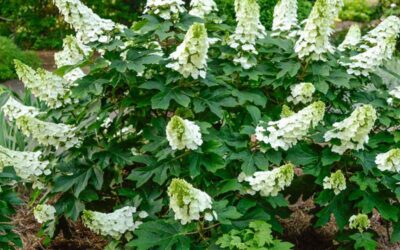 Ahhh!!! Spring and early summer! The time of year that stirs our mind, spirit and body into venturing outdoors and communing with nature. So you rise up, arm yourself with tools and head out to tackle the weeds, pruning and edging. After all of the ‘grunt’ work is done you head to the stores to buy your beloved summer plants. Buying plants that have been pampered in greenhouses to look their very best to entice you to buy them. At home, you follow all the rules for Southern gardening: Till the clay. Amend your soil with sand and peat moss. Mix in some all-purpose fertilizer. Plant your summer selections and water. Then the heat comes and quite possibly a drought. Or perhaps too much rain. In no time at all those lovely summer plants are not well or worse — not even alive! There is an alternative…

END_OF_DOCUMENT_TOKEN_TO_BE_REPLACED 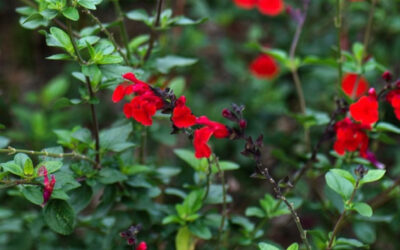 Autumn Sage is a perennial plant native to North America – specifically native to Texas Hill Country and Mexico. It is named for Josiah Gregg, a naturalist who found it as he traveled throughout the Southwestern United States and Mexico.

It is a sub-shrub that blooms from March – November on previous or current year’s growth, attracting pollinators. It is specifically known as a magnet for Hummingbirds. It thrives in rocky soils but does well in dry to medium well-drained soils. When first planted, water 2 times a week until it is established but then it does well on its own. If it gets to be terribly hot for too many days with no rain at all, I will sometimes water it, but it seems to thrive even when neglected – perhaps that is why I love this plant so much…

END_OF_DOCUMENT_TOKEN_TO_BE_REPLACED 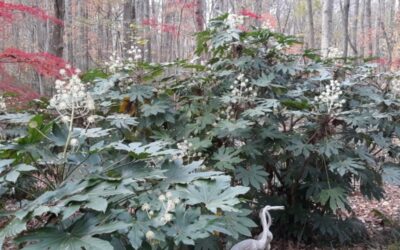 Garden Week In Georgia: Then Flowers ‘d be the Friends…In Praise of My Good Friend Fatsia Japonica by RGC Blogger Florence Anne Berna

A glossy leaf plant, Fatsia Japonica is also known as false castor oil plant or Japanese aralia. It is native to Japan and Korea. It is evergreen growing from 3 to 16 feet tall. Its leaves are large fans and its flowers look like something from outer space with small white globes blooming on tall white stalks.

END_OF_DOCUMENT_TOKEN_TO_BE_REPLACED 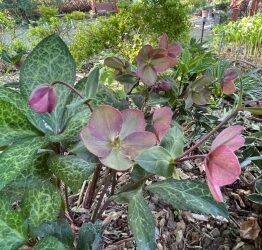 Note from Suzy: Here’s a fantastic resource for garden enthusiasts everywhere. Guest blogger Jim Hodson contacted us via our website to let us know about the Master Gardener resources Fast Growing Trees developed. You need to check out this site. Be careful, though. My initial check-out of the resource turned into a delightful 2-hour exploration followed by many subsequent visits. There’s a direct link to the Master Gardener section In Jim’s post…

END_OF_DOCUMENT_TOKEN_TO_BE_REPLACED 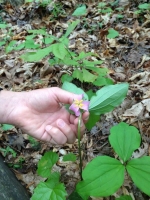 For several years I’ve been a little late trimming the liriope. Determined to get a jump on it this year, I did some research and found great info on what I can do right now, not just with the liriope, but with my gardens…

END_OF_DOCUMENT_TOKEN_TO_BE_REPLACED 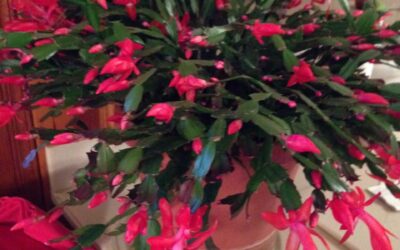 Should I repot my Christmas Cactus?

END_OF_DOCUMENT_TOKEN_TO_BE_REPLACED 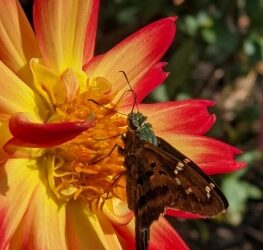 I love my dahlias. I bought some tubers a few years ago, planted them as soon as they arrived, and several weeks later was delighted with beautiful pink and sunset-orange blossoms. They bloomed throughout the latter part of summer right up until the first frost. I left them in the ground for the winter and they returned the following year.

After that, I wanted to learn more and started to research growing dahlias. I was surprised to learn that they don’t “winter” well and are often killed by freezing cold weather. I was fortunate in that the first winter was an especially mild one and my tubers survived.

I don’t want to run the risk of losing my beautiful dahlias, so this year, I’m going to dig up the tubers and store them properly over the winter. Since we’ve already had a couple of frosts, now is the time!

END_OF_DOCUMENT_TOKEN_TO_BE_REPLACED

Cooler temperatures and fewer hours of sunlight throughout the fall initiate the cold-acclimation process which enables plants to withstand winter temperatures. The best way to prevent cold damage is to select plants that can tolerate temperatures where you live. Georgia has different climatic zones, so it’s important to select plants that meet the minimum cold-hardy requirements for our area. For North Fulton that’s zone 7B.

Cold temperatures and wind can damage all parts of the plant including fruit, stems, leaves, trunk, and roots. Carefully selected plants can survive a freeze but may not survive a prolonged period of below-freezing temperatures.

Healthy plants have a better chance of surviving cold weather. A soil sample is the best method to determine what nutrients plants need. Contact the UGA extension agent to get information about soil testing.