Garden Week in Georgia: Hard-Pruning Rosemary or Down the Rabbit Hole by RGC Blogger Suzy Crowe 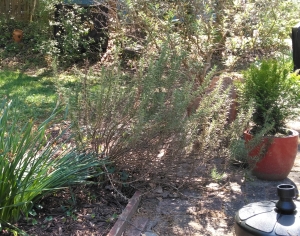 This winter, my neighbor cut down a 50-year old maple tree on the east side of my back yard, instantly changing the light in my yard. My rosemary, which had crept toward the house in search of light, could now grow straight up. It needed hard pruning so that it could flourish in the new sunlight.

Of course, I hard to research how to prune rosemary before daring to attempt such a drastic pruning. My research told me to hard-prune rosemary in the winter before the rosemary started growing again. Sources also cautioned against cutting shortly before or during a cold period. With this conflicting information, I decided to prune the rosemary the first week in April. Things were under control. I was ready to roll, then e-gads! It got up to 80 degrees in March. What?? Now what was I going to do? Since this is Georgia, I knew we would have to have at least 1 more hard freeze before April 15, but wasn’t that rosemary trying to throw off the shackles of winter and grow? What to do, what to do? I decided what the heck, if I killed the poor plant, I could replace it. Not that I wanted to replace it, but I could. 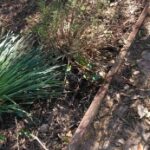 With sharp, clean hand-pruners, I pruned that plant. After hard-pruning, my rosemary was petite and shapely–in a hard pruned way, that is. I also had a wealth of freshly cut rosemary on my hands.

I knew just what to do with this since, while I was wandering through the web, reading about pruning rosemary, I hopped off on every link that had suggestions on what to do with the trimmings. I read about propagating rosemary via cuttings and water-rooting; making rosemary salt; cooking rosemary beans; drying rosemary; preserving rosemary in ice cubes; sliding farther and farther down the rabbit hole with each click of my mouse. Hmmm…maybe that’s why I didn’t get the rosemary pruned before the March heat wave.

Anyway, the down-the-rabbit-hole part of me wouldn’t let me simply throw away the trimmings. Nope. Not me. So I revisited the rabbit hole and chose a few of those suggestions: 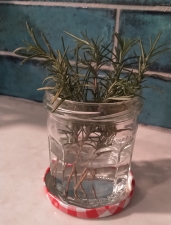 As you can tell, this pruning project turned into quite the adventure. I hope you, too, have some down-the-rabbit-hole gardening adventures during Garden Week in Georgia. Just don’t forget to come out of the rabbit hole.