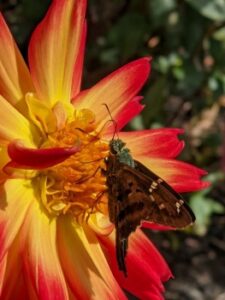 I love my dahlias. I bought some tubers online a few years ago, planted them as soon as they arrived, and several weeks later was delighted 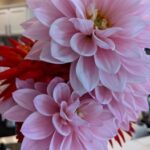 with beautiful pink and sunset-orange blossoms. They bloomed throughout the latter part of summer right up until the first frost. I left them in the ground for the winter and they returned the following year.

After that, I wanted to learn more and started to research growing dahlia. I was surprised to learn that they don’t “winter” well and are often killed by freezing cold weather…I was fortunate in that the first winter was an especially mild one and my tubers survived.

I don’t want to run the risk of losing my beautiful dahlias, so this year, I’m going to dig up the tubers and store them properly over the winter. Since we’ve already had a couple of frosts, now is the time! Cut off the stems and leaves. It’s a good idea to let the tubers cure (dry out a little), especially the larger ones. Shake the dirt off, but it’s not necessary to completely clean them. They may be okay wrapped in newspaper, and/or 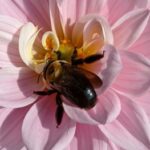 stored in a paper bag. But, it’s even better to store them in dry-to-slightly-moist packing material such as peat moss, coco coir, wood chips, pet bedding, or sawdust. You could also use a mixture of vermiculite and perlite. Use whatever you have on hand.

Line the bottom of a box with newspaper to keep any packing material from falling through the cracks. Layer the packing material on top of that. Lay the tubers in the box so they will be surrounded by the packing material. You can store several clumps in the same box as long as they are not touching. Fill the box with packing material so the tubers are completely covered. Close the box and put on a shelf. It’s important that your dahlia storage space is cool and dry. A basement or the inside wall of your garage should work. If it is too warm, the tubers could rot.

You’re all set! After the last frost next spring, you’ll be able to replant your tubers and enjoy beautiful dahlias from late summer through fall. 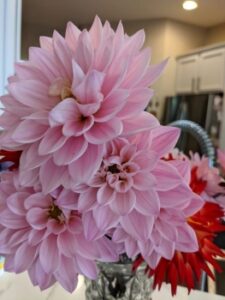