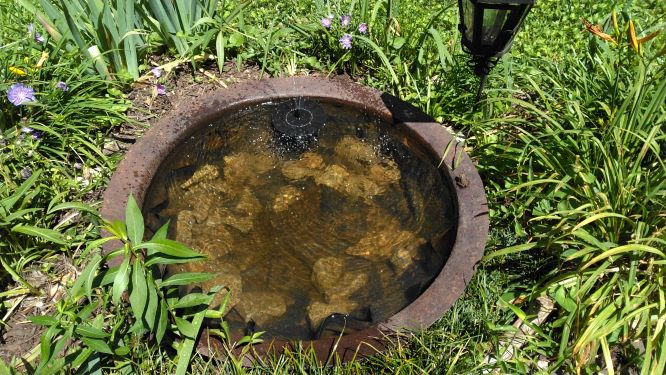 I love fountains. Their sound is soothing, happy music to me, they attract wildlife, and they give birds a place to drink and bathe. This spring I decided to convert a wet area in my landscape to a fountain. The wet area was a bog I created with reeds and yellow iris in my grandfather’s 55 gallon cast iron scalding pot. I was planning to go with a fountain with an electric pump until I came across the cute little ZETIY 100% solar bird bath fountain that doesn’t require a battery or electricity. You can’t get any greener than that! In addition, it only cost $16.70. It sounded like a win-win for me and for the birds.

When the fountain came in, I decided to test it before clearing out the boggy mess in the scalding pot that would become a fountain. 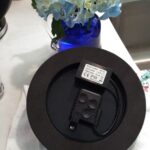 The fountain was very easy to put together — I just had to put the pump into a clamp on the underside of the fountain and test out the 4 nozzles that came with the fountain. It took me a little while to figure out how the pump fit in the clamp, so I took a picture of the bottom of the fountain in case you decide to get your own fountain.

Once the pump was clamped down, it was on to testing the fountain. I used a large metal bowl and tested each nozzle. The nozzles were very easy to change and had a nice array of spray-patterns. I got a nice little sprinkle from the nozzle I ended up choosing. I also fell in love with the sound of the fountain–I could tell it was going to be well worth the time it would take to clean out the scalding pot. Here’s my video of the test. 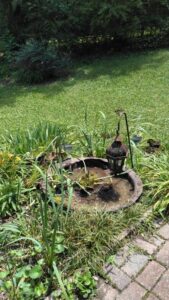 Next I moved on to cleaning out the swamp. I forgot to take a picture of it before I started, but here’s what it looked like when I was close to the end. I transplanted the iris and the reeds in a shady area of my yard that has poor drainage. So far, they are still living and growing.

Once I cleared out all of the plants and as much of the dirt as I could, I filled the fountain with water. As you can see, there was a ton of vermiculite in the water. Why oh why did I use ancient potting soil when I created the bog? After a feeble attempt to float out some of the vermiculite, I had a brainstorm–I could use wire mesh to scoop out the pesky stuff. That worked quite well. I scooped out all of the vermiculite I could see, let the water settle for a while, then I scooped out more. Scoop, settle, repeat. Scoop, settle, repeat. After a while, the vermiculite was gone. 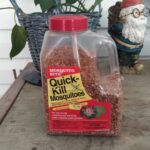 Since the fountain is 100% solar, there is no moving water at night. I needed to figure out a way to prevent mosquitoes without harming the wildlife. I needed an environmentally friendly biological solution. Lucky for me, I faced this same problem with the bog, so I just added some Mosquito Bits I had on hand. I have to add a few more bits every two weeks, but Mosquito Bits are a great solution.

A day or so after I finished the scooping, the water was clear as a bell. Now I’m seeing a lot more wildlife activity in my yard–I’ve seen nuthatches, house finches, brown thrashers, robins, blue jays, cardinals, a hawk, other birds whose species I don’t know, chipmunks, squirrels, and, as you can see in the featured image at the top of this post, a little frog sitting on the right side of the rim that thinks it has found a new home.

This is a great little project–I highly recommend it to you. It’s a win-win for wildlife and for the intrepid gardener.