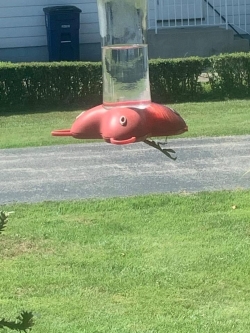 As I sat at my computer this afternoon, I noticed that a praying mantis had climbed up the support post to the eave, out over a Shepard’s hook, and down onto my hummingbird feeder. It eventually took up residence under the feeder looking for prey. This mantis is still a “juvenile” as it will molt several more times this year to grow twice, maybe three times its current size. I know that fully adult Chinese Mantises have been shown to capture 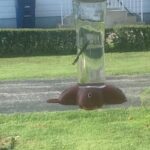 hummingbirds which is one of those wonders of nature that would seem impossible. But, watching this small sized predator being fearless when a hummingbird approached, I could see how a full-sized adult could subdue a hummer. This one stalked the hummers every time one would approach, even making an attempted strike. The birds were definitely leery. I did see the mantis snare a wasp and start to eat it, but quickly let it go.

Just a quick biology lesson from my friend Rick Kneisel, who is a biologist/naturalist/science teacher—All adult mantids die in late fall into early winter. Egg sacs, or ootheca, are produced on plants or even on the side of structures (depending on the species of mantid) and will remain dormant until the following spring. They will hatch once warm weather comes and they can go through development and look like very tiny miniature adults. It will take them all summer to go through enough molts to increase in size to become the larger mantids we see in late summer. The Chinese Mantid is an introduced species and its benefit of eating pest insects is tempered by its preying on many pollinators, butterflies, and even those occasional hummingbirds. Most of the egg sacs that are sold are of the Chinese Mantid and therefore have helped to increase the population of this non-indigenous species.